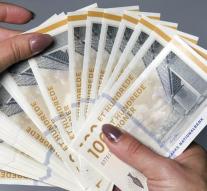 copenhagen - The Danish police have taken the first cash of asylum seekers. Officials Tuesday took about 80,000 kronor (10,750 euros) from five Iranians who had landed at Copenhagen airport with forged documents and applied for asylum.

According to a controversial law which came into force in February should asylum seekers in Denmark money and jewelery more than 10 000 kronor (1344 euros) worth cede, as a contribution to the cost of housing and living.