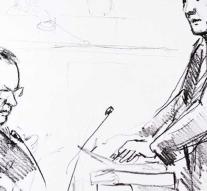 copenhagen - The Danish inventor Peter Madsen (47) maintains that he did not kill the Swedish journalist Kim Wall. However, he admits cutting her body into pieces. 'She was killed in an accident', Madsen said in Copenhagen on Thursday during the first day of the trial against him.

Madsen stated in court that he wanted to repair something and therefore put a compressor and two engines on. When he was outside on the deck, the hatch would have closed and Wall was still in the submarine. Madsen said it took some time before he opened the hatch again. The woman would then have been stitched. 'I had to leave because otherwise I would die'.

Previously, Madsen had several other statements. Shortly after her disappearance, Madsen claimed to have safely deposed the reporter. During the interview there was another story: she had a hatch on her head. Later, he stated that she had come by a carbon monoxide poisoning.

He lied in his own words about her death because he was 'in complete denial'. And he did not want the whole world to know how the journalist had died, according to Madsen during the first trial day.

After Wall had died Madsen wanted to throw her body overboard. 'But that did not work,' he said in court. 'It was horrible to see her through, but it went pretty quickly'. The prosecutor asked if he was sexually aroused by sawing, after which Madsen indicated 'worried' to be him because of the question. He denied having had sexual contact with Wall in the courtroom.

The cause of death has not yet been determined.