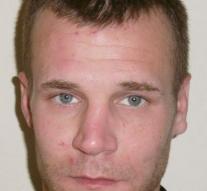 kleef - The police in German Kleef, not far from Nijmegen, warned against a dangerous and potential armed man escaped from a psychiatric institution on Friday.

The 35-year-old man met on Thursday evening other detainees in the Bedburg-Hau clinic and then managed to escape by crashing over a four meter high wall, the Rheinische Post reported.

Sources in the psychiatric design denote the fugitive Krischan Fischer as incalculable and dangerous. The police are also looking for him with helicopters. The man was arrested earlier due to theft.