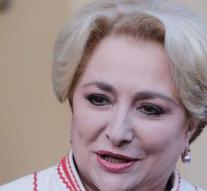 bucharest - The Romanian president Klaus Iohannis has appointed Viorica Dancila as the new prime minister. The ruling Social Democrats (PSD) pushed European MEP Dancila on Tuesday as a candidate for that post.

She succeeds Mihai Tudose, who retired on Monday. Dancila (54) is a close ally of the strong PSD leader Liviu Dragnea and is Vice-President of the European Parliament's Committee on Agriculture and Rural Development.

Iohannis said to expect that a new cabinet will be in office before 1 February.