Home / World / Damage is not too bad by typhoon in Taiwan 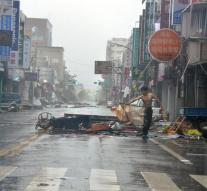 - The typhoon Nepartak on Friday in Taiwan caused relatively little damage. The number of victims is also bad. The authorities counted one dead and 66 injured after the storm raged.

15. More than 000 people were evacuated. In large parts of the island, the power went out. Nearly 190 000 households were left without electricity. Especially small, cheap houses were affected and lost their roofs. In the east, the typhoon was accompanied by heavy rains which caused local flooding. Aviation paralyzed to a large extent. More than five hundred inbound and outbound flights were canceled.

Nepartak now draws toward the Chinese mainland. According to meteorologists, it decreases slightly in strength. China has suffered a few days under inclement weather. Typhoons are normal at this time of the year and around the South China Sea. Previously covered China's countless deaths by severe storms. Today, the government evacuates much faster residents of threatened areas.