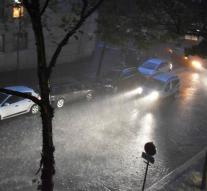 paris/nantes - Heavy rains have led to floods and many damage in parts of France. French media reported Monday that since 1880 in Paris no so much rain has fallen in such a short period of time. About 50 millimeters dropped down in the city on Sunday evening.

Numerous parking garages, cellars and subway stations were underwater. Traffic in the underground has reopened Monday morning, but three metro stations were still closed due to the water pollution. Also, the west of France, especially Nantes, suffered from the 'flood'.