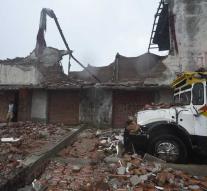 geneva - The damage caused by natural disasters has doubled in the past ten years compared to the previous years. That is what the International Red Cross figures in a report. As far as natural disasters are concerned, 2017 was one of the most precious years ever. Major disasters, such as the hurricanes in the United States and the Caribbean, caused more than 330 billion dollars (more than 290 billion euros) of damage, according to the Red Cross.

Most of the disasters occurred in the last decade in Asia, where most people were also affected. Between 2008 and 2017 there have been a total of 3715 natural disasters. Of these, five out of six were related to the weather according to the Red Cross. China, the US, the Philippines, India and Indonesia are most often affected by natural disasters.