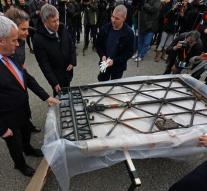 dachau - Stolen wrought iron gate of Dachau concentration camp near Munich is back in southern Germany. The 100 kilo gate with the inscription Arbeit macht frei was Wednesday by representatives present reminder camp received.

The fence plunged in November, about two years after the theft, in Norway in the coastal city of Bergen. It is not clear who stole the gate. The fence will not be put back in the old place, but are recognized after restoration of the permanent exhibition at the former concentration camp. The gate is in a secure cabinet.

The Bavarian Minister of Culture Spaenle Ludwig said it was an important day for the remembrance camp. He called the theft an act of aggression against the place of commemoration.

Dachau was the first major concentration camp of the Nazis. Between 1933 and 1945 there were more than 200 000 people being held across Europe, of whom 41 500 died. April 30 is paid to the 72nd anniversary of the liberation of the camp.