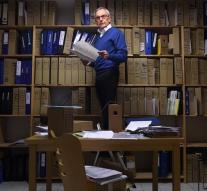 rotterdam - Tuesday is D-day for former VVD Jos van Rey. The Limburg gets ex-politician told the court verdict. The requirement is two years in prison for corruption, electoral fraud and money laundering. Also wants the Prosecution that he spent three years no longer allowed to work for the government.

The prosecution of Rey accuses that he breached his duty of confidentiality as a member of the confidential advisory committee for the appointment of a new mayor of Roermond in 2012. He would interview questions and have passed the correct answers to his favorite candidate, VVD party member and mayor of Meerssen Ricardo Offermanns.

It would also have assumed From Rey bribe his friend and developer Pete Pol in exchange for contracts. Against Van Pol is therefore demanded two years in prison, he heard the verdict Tuesday.


Rey is further suspected of having recruited vote for elections and laundering 175. 000.

He belonged to the VVD include councilor and alderman in Roermond, a member of the provincial council in Limburg and a member of the Senate and House. The VVD Van Rey put because of the various allegations against him from the party.

Rey throws himself all the accusations away from himself.,, This is too absurd for words, 'he responded to the requirement.,, They have nothing. I never acted out of self-interest, never! '

Political career started in 1974 as a local councilor in Roermond. From 1979 to October 1982 Alderman social welfare and education. Then he was variously Member of Parliament, member of the Provincial States in Limburg, Roermond councilor, alderman again in that city, and Senator.

He owns Van Rey Realty. In 1998, Van Rey Knight was in the Order of Orange-Nassau. He laid on October 22, 2012 have been alderman and member of the Senate down.

Prosecuted for: including corruption, electoral fraud and money laundering. There is, therefore, required two year sentence against former VVD.