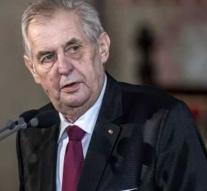 prague - The Czech president Milos Zeman has asked the BIS intelligence service to find out whether the nerve gas used in Great Britain can come from the Czech Republic. The Russian authorities have previously suggested that the drug may come from the Central European country.

'The president has instructed BIS to find out whether the nerve gas 'novitsjok' has been developed or stored on Czech territory, in industrial or scientific facilities,' Zeman's spokesman said. The investigation follows the 'repeated Russian accusations against the Czech Republic. '

The Russian suggestion that the nerve gas used in Salisbury may come from the Czech Republic has led to resentment. 'The Russians have exceeded all boundaries when they said that the toxic agent novitsjok might have come from us,' said Prime Minister Andrei Babis. 'That is absolutely false. '