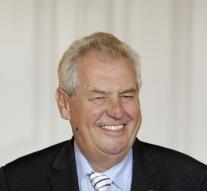 geneve - The UN has strongly criticized the way in which the Czech Republic refugees treats and looks at how the country against migrants. Asylum seekers should be firmly put to ninety days. They must return their money to pay it their captivity.

This was announced by the chief UN human rights Ra'ad Zeid al- Hussein in Geneva. He said to be alarmed by xenophobia in the public debate on immigrant and anti-Islam remarks by the Czech President Milos Zeman.