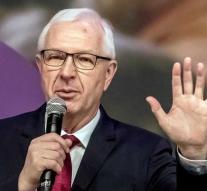 prague - The incumbent Czech president Milos Zeman has won the presidential elections in the Czech Republic. This is reported by the Czech news agency CTK. He goes on for a second term of five years.

The pro-Russian Milos Zeman took on the liberal professor Jiri Drahos. The president represents the Czech Republic abroad, plays a role in the formation of government and appoints members of the constitutional court.