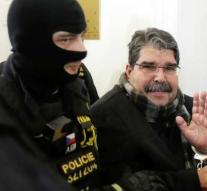 prague - A Czech court ordered Tuesday the release of former Syrian-Kurdish PYD leader Saleh Muslim, his lawyer said. This despite the call from Turkey to keep him in detention pending an extradition request.

Muslim formerly led the PYD, the most important part of a coalition that governs the Kurdish autonomous parts of northern Syria. He was detained on the weekend at the request of Turkey in Prague on charges of disruption of the state and murder.

The 67-year-old Muslim was arrested after an international search request via Interpol. He has been wanted since 2016 for an attack in Ankara. Turkey put Muslim on a list of alleged terrorists two weeks ago, because he would be a member of the banned PKK.