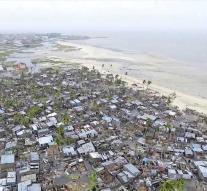 geneva - The cyclone that struck southeastern Africa in recent days may well become the largest weather-related natural disaster in the southern hemisphere ever. With those ominous...

According to the organization, 1.7 million people were in the path of the cyclone in Mozambique, while another 920,000 people were affected in neighboring Malawi. The whirlwind was accompanied by tidal waves at a height of 6 meters that caused 'incredible destruction' in a large area.

The official death toll is almost 200 in various countries, but the UN fears that this will increase considerably. The Mozambique government has already said it is taking into account more than 1000 victims.