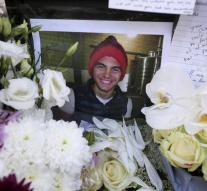 london - The young Italian prince Filippo Corsini (21) on Monday killed in a tragic road accident in London. By metro Knightsbridge student was hit by a truck.

Two days later, it is clear that Corsini is a member of a noble Italian family. The Italian is a family of Lorenzo Corsini, who was elected in 1730 to Pope Clement XII, who ordered the construction of the world-famous Trevi Fountain in Rome.

Classmates and friends Corsini Wednesday laid flowers at the scene of the accident.

The 42-year-old truck driver was arrested on suspicion of reckless driving. According to British media, the prince this year the eighth fatality among London cyclists.