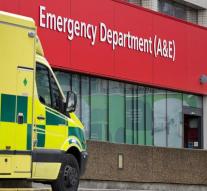 london - Several hospitals in England were hit by a major cyber attack on Friday. Employees have been shut down from their computers and hospitals have to cancel appointments and move patients. This reported the British National Health Service (NHS).

'We are dealing with a cyber incident and we are working hard on a solution,' said a spokesman for NHS. According to the spokesman, sixteen institutions reported that they were hit by cyber attacks.