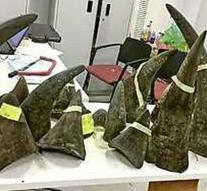 hong kong - Customs in Hong Kong have intercepted a record rhino horn with a weight of 40 kilos. The party came from Johannesburg (South Africa) and was en route to Vietnam.

The value of the intercepted horns is about one million dollars (almost 900,000 euros). Two men have been arrested. The catch follows two previous seizures of large quantities of contraband from Africa, including pangolins and more than a thousand ivory tusks.