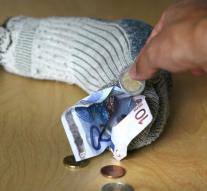 dresden - Employees of customs in Dresden, Germany have an old sock in the laundry room of a passenger train behind the wall pried out where one kilo of cocaine was pressed. Market value: € 150,000.

An officer discovered 'a dark fabrics ball 'behind a crevice in the wall covering. A rescue dog called drug confirmed the suspicion.

It was a big herensok which two parcels were pushed each with a pound of cocaine. Customs could relate any traveler with the drugs. The discovery was made in the train from Prague- from Germany- to Zurich.