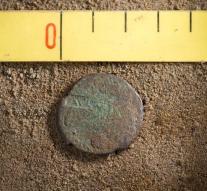 bramsche - German archaeologists during excavations in Kalkriese near Bramsche eight gold coins found from the time of Emperor Augustus (63 BC- 14 AD). The experts see this as confirmation that took place the legendary Varus in the hamlet of Lower Saxony.

Germanic rebels brought by the historiography in the year 9 AD the Roman legions of general Varus in the Teutoburg Forest a bloody defeat.

The scientific leader of the excavation, Salvatore Ortisi of the University of Osnabrück, said Monday that this particular discovery is a new indication of a Roman battlefield at Kalkriese at the beginning of the era. The gold pieces are around the birth of Christ beaten in Lyon. At that time they represented each the value of an annual income of an ordinary soldier. Apparently someone hid the coins in great distress in a wallet.