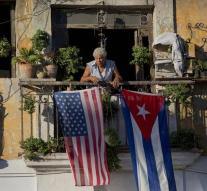 miami - President Trump visits Miami on Friday where he will reveal how he will shape the American relationship with neighbor Cuba. The great Cuban community in the capital of Florida is not comfortable. Action leaders have announced demonstrations against the president.

Trump is expected to announce the decommissioning of Cuban politics by its predecessor Barack Obama with a speech at the Manuel Artime Theater in Miami. That is exactly what the Cuban community is afraid of. The director of the Florida Immigrant Coalition stated in the Miami New Times as follows: 'Under the Obama government, there have been historical steps forward in the relationship with Cuba and we condemn any attempt to reverse the clock. '

Under Obama, Cuba was suddenly no longer a sworn enemy. The president visited Cuba, spoke with his colleague Raul Castro and paved the way for normalization of relations. Diplomatic relations were restored. Embassies have been opened. The over fifty year old financial-commercial embargo has not been officially canceled. Congress in Washington should still give permission.

However, loose financial and economic measures have been taken. For example, Americans can do business on the island. Cuban emigrants in the United States may also transfer money to their relatives. Furthermore, the travel restrictions under Obama were largely eliminated: Cubans may return to family visits and American tourists to Cuba.

In the run-up to the visit to Miami, the White House swung over the content of the speech. However, the president had no doubt at all during his election campaign that he wanted to reverse the decisions of his predecessor. How far he wanted to go there, remained unclear.