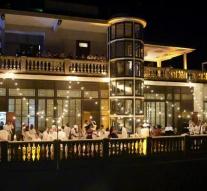 havana - In the Cuban capital Havana come there to attend any new privérestaurants at. The authorities do not provide licenses more for these private restaurants, called paladares because the owners often break the law.

'We want to be successful but we do not tolerate indiscipline,' said Hamze Isabel Ruiz, vice president of the county council, on Thursday in the party newspaper Granma.

Lately, many gourmets summoned and not only because they would smash their products on the black market and evade taxes. Some paladares have besides exquisite cuisine also prostitutes and drugs are on the menu.

Moreover, the much economic prosperity of the restaurant owners still communist government of the island fear that will lead to social unrest.

Cuba now has more than 1,700 private dining occasions. A few have even been known far beyond the border. US President Barack Obama moved with his family in 'San Cristobal', Madonna and reality star Kim Kardashian dined at La Guarida.