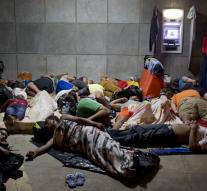 - There seems to be a solution to be found for the thousands of Cuban refugees stranded in Costa Rica. The Central American countries have agreed to a pilot project, with which the asylum seekers from traveling to the US, as they want to. That the Ministry of Foreign Affairs of Costa Rica Monday (local time) said.

Since November, the number of Cuban migrants stuck in Costa Rica rose sharply. It is estimated that there are now at least 8000. They want to the US, but that's not because neighboring Nicaragua, which lies on the route, the border is closed to refugees.

At a meeting in Guatamela City have Panama, El Salvador, Guatemala, Honduras, Mexico, Costa Rica and the International Organization for Migration reached an agreement to help the Cuban refugees. Since January, the applicants placed on a trial basis by plane to El Salvador. From there they go by bus to Mexico and are delivered to the US border

The wave of refugees is likely to have a reaction to the better relationship the US and Cuba. Cubans fear that by the restored diplomatic ties soon not get as easily as before a residence permit for the USA. A special law passed in 1966, under which Cubans who illegally enter the country is still able to settle in the US, may be revoked.