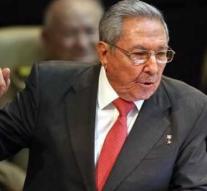 havana - The communist island state of Cuba wants to change the more than forty years old constitution. The parliament has appointed former president Raúl Castro (86) the head of the committee on Saturday.

The current constitution dates from 1976, when the Cold War was still in full swing. Raúl Castro, the brother of former leader Fidel Castro, has already spoken out for adjustments. There may be a limit on the number of terms for political leaders. Also, economic reforms are probably included in the constitution.

The daughter of the former president, Mariela Castro, wants the new constitution to make gay marriage possible. She said to take action there before. The parliament may soon first consider the draft version of the new constitution. This will later be presented to the public in a referendum.