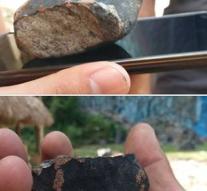 pinar del río - In the west of Cuba a meteorite has probably been taken. Witnesses say they have heard a huge explosion. There are so far no known wounded cases.

On social media, images of the alleged impact circulate. For example, traces of the meteorite would appear in the air and different photos of black debris would circulate.

Residents from the region heard a huge explosion, US media reports. Windows began to vibrate a lot in the wide area. Some windows might even have gone.