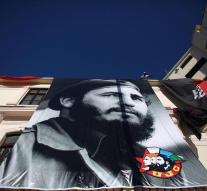 havana - Cuba celebrates the ninetieth anniversary of the pensioner 'comandante' Fidel Castro exuberant. The night of Friday to Saturday was in the capital Havana already completely dominated by Castro's ninetieth, with fireworks, music and dancing. Numerous Cubans toasted on,, another ninety years' under the care of the aged communist rule since 2006 that let to his brother Raul.

Cuba has been running hot days before the birthday. That was luster with another photo exhibition about Castro's early years as a rebel leader, but also a record cigar of 90 meters in honor of the most famous cigar smoker in the world. Saturday's festivities should reach a climax.

The question is whether the old shows on the party. Castro's health is fragile and he appears rarely in public.


Castro still seems to enjoy a certain popularity, although many Cubans also warmly welcomes the relaxation that has brought his pragmatic brother. Raúl has, among other approaches to the US, the archenemy.