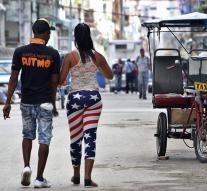 havana - Cuba announced Wednesday a five-day military exercise in response to the news that Trump will be the next US president.

According to Havana, the exercises needed to prepare for possible 'enemy action. '

Trump uttered during the campaign criticized the agreement between the US and Cuba, which envisaged after half a century of hostilities to normalize the relationship. Trump threatened to blow up the agreement because it would be too weak.