Home / World / CSU in Bavaria has lost an absolute majority 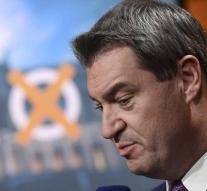 munich - The Christian Democratic Party CSU, which has been ruling for decades, lost its absolute majority in the state elections in Bavaria, Germany. After counting the votes, the Christian Democrats are at a loss of 10.4 percent compared to 2013 and come to 37.3 percent of the votes.

Second party according to the poll the Greens with a 17.8 percent of the vote. The SPD, the national coalition partner of the Christian Democrats, loses more than half of its supporters and reaches an historic low of 9.5 percent. This makes the Social Democrats the fifth party and smaller than newcomer Alternative für Deutschland and party of the Free Electors. The AfD can count on 10.3 percent.

The Conservative Free Voters get 11.5 percent of the vote, a small increase compared to 2013. It is possible that CSU Prime Minister Markus Söder will be in talks with this party on Monday to form a coalition.

The CSU, with the exception of the years 2008-2013 when the party needed a coalition partner, ruled with an absolute majority of Bavaria for decades. In 2013, the CSU gained 47.7 percent of the votes and earned enough seats for the absolute majority.