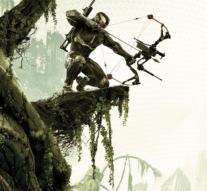 - Game Developer Crytek opened an office in Turkey and this attracts a whopping $ 500 million. Reported tech site Hard Avenue. It is not clear where founded Crytek, a German company has by three Turkish brothers, the money from. The fact is in financial dire straits.

The announcement of the investment comes from the Turkish Prime Minister Binali Yildirim. He called Crytek not by name, but from the description he gave of the company, it can not be different from the game developer.

However, Crytek has announced earlier this month to close several offices, including those in Budapest and Sofia. Also prove employees at the headquarters in Frankfurt for months to be paid.

Crytek is mainly known from the Crysis games. Recently, the company focuses mainly on virtual reality games like The Climb and The Journey.