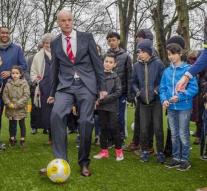 - The Cruyff Court in Molenbeek, Belgium, which opened on Thursday, was destroyed within a day and a half. Vandals have cleared the material shed, smashed the windows of the loft and tried to set fire on the synthetic turf pitch.

Niels Meijer, director of the Cruyff Foundation, regrets that it has now gone wrong in Molenbeek. 'With this field, the Cruyff Foundation wanted to bring something positive in the neighborhood that so often came into the news negatively. There was also very enthusiastic response. This is very unfortunate ', Meijer explains to RTL Nieuws.

The director is not yet aware of the exact damage. It will be recorded on Monday.

Minister of Foreign Affairs Stef Blok was at the official opening of the Cruyff Court in Molenbeek on Thursday afternoon, exactly two years after the attacks in Brussels. The lawn with artificial grass in the Brussels municipality that has often been associated with Muslim extremism and attacks must offer something positive to young people.