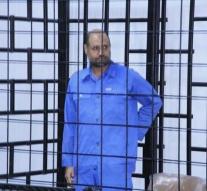 - The son who was regarded as the crown prince of the late Libyan dictator Muammar Gaddafi has been released from his Libyan cell. Saif al-Islam Gaddafi has been since April 12, according to his lawyer at large, reports.

Saif al-Islam would have benefited from an amnesty.,, He is safe in Libya, 'said his lawyer Karim Khan.

The 44-year-old Saif al-Islam had since 2011 held by a militia in Zintan, in the mountainous western Libya, where the authorities in Tripoli have no say. A court in Tripoli sentenced him in absentia to death for crimes he allegedly committed during the reign of his father and the rebellion that Gaddafi overthrew in 2011. The United Nations denounced the location,, unfair 'trial.

The International Criminal Court wants to try Saif al-Islam. According to Khan can not because he has been convicted in Libya.