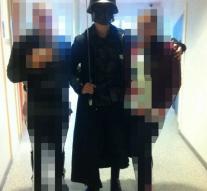 trollhattan - The attack by a masked man with a sword on teachers and students in Sweden has claimed a third life. A teacher has succumbed to his injuries, reports the Swedish newspaper dages Nyheter Friday on the orders of the police.

A masked man held in October, four people down at a school in Trollhattan. He mainly focused on immigrants.

Because it was just before Halloween, students thought at first that it was a joke and they let themselves be photographed with the perpetrator. The 21- year-old man was shot by police and later deceased.