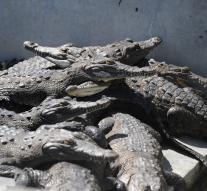 - For thousands of crocodiles in Honduras threatens starvation due to the alleged misappropriation of funds from their boss. The animals at the crocodile farm in the north of the country have last weekend had yet to eat but the money for a new round.

The farm is owned by the wealthy family of bankers Rosenthal. The authorities, however, have the family 's assets frozen because its members are suspected of laundering large sums of money for drug gangs. And this has allowed the flow of funds to the crocodile farm to dry out.

" We have every day 15. 000 kilos of meat are necessary ", said biologist Sandra Sánchez. " The situation is critical. "