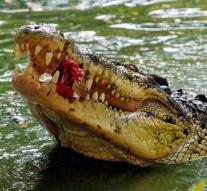 jakarta - The chief of the Indonesian organization for Drug Control (BNN), General Budi Waseso, Monday is visiting northern Sumatra to raise crocodiles for his detention project. The reptiles have been found suitable to monitor the general help a prison island specifically for drug offenders. Crocodiles can unlike ordinary jailer not bribe argues the General. This prevents escapes.

The newspaper Jakarta Globe reported that Waseso his " crocodile plan is coordinated with the Minister of Justice and Human Rights. Green light for the plan there is, however, not yet, but the project is running. The General will also see crocodiles on Sulawesi and Papua whether they are appropriate.

Waseso wants a prison island far from civilization, where drug offenders have to see it for yourself to grub. However, they get sent there food. The island will be surrounded by " as many ferocious crocodiles ".

Waseso wants to put an end to the flourishing trade in drugs in prisons, where many drug offenders virtually undisturbed continue their lives outside the prison.