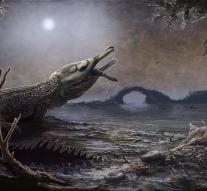 london - A scouring crocodile that made the shallow seas unsafe 164 million years ago is named after the sometimes even fierce Ian 'Lemmy' Kilmister, the deceased singer of the British heavy metal band Motörhead. Scientists have baptized the 5.8 meter long reptile, baptized as Lemmysuchus obtusidens.

The fossils of the sea monster were found in 1909 near the Peterborough. Recent research has shown that it is different from what has been thought of. Michaela Johnson, a palaeontologist at the University of Edinburgh, established this by accurately comparing the shape of muzzle, longer and narrower, and the teeth. These are large and bone, very suitable for cracking turtles and fish with a hard shell.

'He is big, ugly and pretty terrifying. We think Lemmy had found this beautiful, 'said Lorna Steel, curator of the London Natural History Museum, where the fossilized remains lie. She suggested to honor the foreman of Motörhead with the Latin name of this previously unknown prehistoric crocodile. Kilmister founded the band in 1975, died in cancer in 2015.