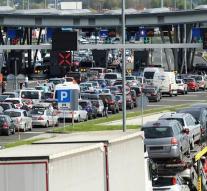 zagreb - It was intended that the external borders of the Schengen area should be checked on Friday extra sharp, but there's Saturday along the Slovenian-Croatian border already seen off.

Along the Croatian border with Slovenia created a traffic chaos kilometer long traffic jams. That caused delays to four hours for the traffic the border wanted to.

Additional monitoring is therefore canceled, reported the Croatian Interior Ministry fears that large damage to the tourism sector. It is this weekend the beginning of Easter holidays in Europe.

Croatia is a member of the EU since 2013 but is not yet part of the Schengen zone. Slovenia joined the EU since 2004 and since 2007 belongs to the Schengen area. The border with Croatia as an external border that should be better monitored held because of the threat of terrorism.