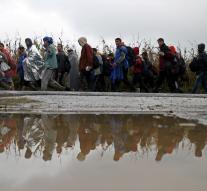 zagreb - Croatia Monday its border with Serbia unexpectedly opened for refugees. On the Serbian side of the border kept themselves according to the UN refugee agency UNHCR estimated 3,000 people in appalling conditions . On the spot it's cold and wet weather . This was reported by the BBC .

The border crossing at the Serbian village Berkavoso is one of the bottlenecks in the Balkans in the journey of refugees towards North-West Europe.

According to UNHCR, the border opened up without any notice. Incidentally, the UNHCR estimates that there are currently in Serbia to stop for about 10000 refugees. The UN fears in the short term to a shortage of care facilities, food and blankets.

The imminent problem in the background is the approaching winter. In another place was in Croatia lead to a buildup of people.

Slovenia admitted to its border with Croatia limited people as it can handle only 2,500 to 3,000 refugees per day. Monday was that unexpectedly a lot faster and reported to the authorities in the capital Ljubljana unexpected that 5000 people were admitted.

The Slovenians accuse Croatia that unhindered migrants are relaying to their country.