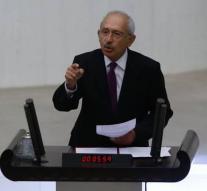 istanbul - On the first anniversary of the failed coup in Turkey, opposition leader Kemal Kilicdaroglu has criticized the government on Saturday. Instead of pursuing rapid normalization, she has 'created a permanent state of emergency' and the case law 'destroyed,' said the CHP leader.

Those who put 'the state's most vulnerable places' to the captains and their supporters must be accountable, otherwise there may never be a real processing, Kilicdaroglu said.

The government is responsible for the move of the Fethullah Gülen, living in the United States, for the coup attempt. Before reaching an open break in 2013, President Recep Tayyip Erdogan and Gülen were politically big friends.

After the coup attempt, approximately 150,000 government officials have been fired or suspended in the state of emergency. More than 50,000 suspects are stuck.