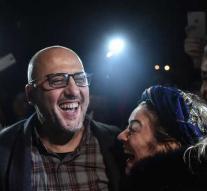 istanbul - The leading Turkish investigative journalist Ahmet Sik has come up with serious criticism of Ankara, shortly after his unexpected release from pre-trial detention. Sik spoke of a 'mafia sultanate'. He did that Saturday in a video message that spread his newspaper Cumhuriyet. The journalist was in custody for more than four hundred days.

The court in Istanbul ordered Friday the release of Sik and also of Murat Sabuncu, editor-in-chief of the opposition newspaper Cumhuriyet. They were arrested after the failed coup in the summer of 2016. The Erdogan government also accused them of having ties with the US-based cleric Fethullah Gülen, according to the Turkish president, the brain behind the coup. The two may leave the prison until there is a verdict in their trial.

Sik says in the video: 'I guarantee that this Mafia sultanate will come to an end. 'In total, eighteen employees of the newspaper were arrested at the time.