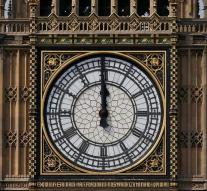 london - The intention of London's Big Ben not to be heard for repairs in the next four years has been criticized by Prime Minister Theresa May and some other British politicians.

Therefore, the House of Commons is going to see if it is necessary to keep Big Ben shut until 2021, according to the BBC.

Earlier this week, it was known that Big Ben is no longer heard from Monday for four years. An exception is made for major events like old and new. Reason is a grand renovation of the Elizabeth tower in which the 13.7 tons of heavy clock hangs. The safety of the workers in the tower must be guaranteed.

Premier May showed her dissatisfaction with the Big Ben plan on Wednesday. 'That can not be true,' said the Prime Minister. Minister David Davis, responsible for the brexit, called it 'insane' that Big Ben should keep silent until 2021.