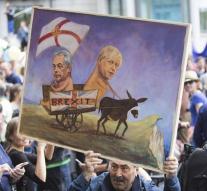 strasbourg - The departure of British politicians after brexitreferendum could count on Tuesday strongly criticized in the European Parliament.,, The disappearing one after another from the scene. I do not understand, I thought that the politicians who were for the brexit still would have a plan, 'said President of the European Commission Jean-Claude Juncker.

,, Patriots not quit when things get difficult, but remain '' says Juncker. He was referring to Boris Johnson waived last week by the British candidacy for the premiership and Tuesday resigned UKIP leader Nigel Farage. Farage is moreover still an MEP, but failed Tuesday in the debate.

Guy Verhofstadt, leader of the Liberals in parliament, spoke of,, rats leaving the sinking ship. ',, Shocking and irresponsible. '' He was referring also to the announced departure of British Prime Minister David Cameron.