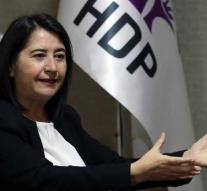 ankara - The former party leader of the left-wing HDP in Turkey, Serpil Kemalbay, was released conditionally after a week. She is not allowed to leave the country. Kemalbay was arrested a few days after her departure as party leader, because she had fierce criticism of the Turkish military intervention in the northwest of Syria against Kurdish militias.

The Democratic People's Party (HDP), established more than five years ago, is seen as the advocate of the Kurdish minority in Turkey. With 59 seats, the HDP is the third party in the Turkish parliament (550 seats). The party works with two leaders, a woman and a man. The predecessor of Kemalbay, Figen Yüksedag, was forced to resign in 2017 after being convicted of spreading terrorist propaganda. Co-chairman of Selahattin Demirtas then disappeared for similar indictments behind bars.

The new HDP chairmen have been Sezai Temelli and Pervin Buldan since last week.