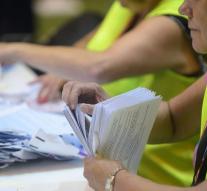 the hague - What the outcome of the British elections means for the brexit, 'we must review.' 'The Netherlands is ready for cooperation,' premier Mark Rutte tweets in a first reaction on Friday morning.

'The British people have chosen. What the new constellation means for #Brexit should be seen. '

European Parliamentary Peter van Dalen (Christian Union / SGP): 'This outcome is disastrous for Prime Minister May and will lead to further uncertainty in Europe. The only point of view is that the pro-European forces in the United Kingdom can unite and deviate a hard brexit. New elections? Many questions right now. '

European parliamentarian Guy Verhofstadt, main negotiator brexit on behalf of parliament: 'Theresa May's own goal will make the difficult negotiations even more complicated. 'EU Commissioner Pierre Moscovici (Financial and Economic Affairs) had the same analysis:' Theresa May is in a less simple situation. '

Michel Barnier, main dealer brexit on behalf of the European Union: 'The brexit negotiations must begin when the United Kingdom is ready. The timetable and position of the EU are clear. Let's put the heads together and close a deal. '

EU Commissioner Günther Oettinger (Budget and Personnel) said on Friday that it is uncertain whether negotiations on the brexit can start on time, now that no clear winner can be appointed after the elections. Against the Deutschlandfunk channel, Oettinger said that Britain could provide a weaker result as a weakened negotiating partner.