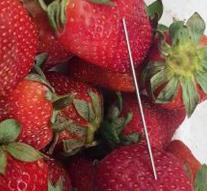 auckland - A New Zealand supermarket chain has raised alarms after needles were found in strawberries. The relevant fruit brand is removed from the shelves, the newspaper The New Zealand Herald reports. The company Countdown advises customers from Australia to cut strawberries for safety.

It is unclear whether the needles have been found by an employee or customers of the supermarket. A spokeswoman for the company did not want to go into details about the find. In nearby Australia there has been some unrest about needles in fruit for some time. Media reports about a real 'strawberry crisis'.

At several locations in Australia, needles have been found in the red fruit in recent times. A senior employee of the trade association of strawberry growers spoke earlier about 'commercial terrorism' that the sector causes major damage.

The authorities also received reports about needles in other fruits, such as bananas and apples. It is probably in some cases jokes or copycat behavior. The Australian government has announced that it will introduce stricter penalties for people who 'infect' fruit.