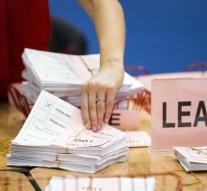 - The Irish Government has a crisis meeting held British voters now make the European Union decided to turn his back. The country's economy depends heavily on Britain and will definitely feel a departure from the EU.

The decision,, huge implications for Ireland ', said Friday the Cabinet. Ireland is more affected by a Brexit than any other country, according to Dublin.

Finance Minister Michael Noonan calculated earlier this week, the economic implications for Ireland of a brexit. The country loses an estimated 1.2 percent of its gross domestic product by the British departure. Trade between the two countries, with a value of around 1.2 billion euros per week, could shrink by 20 percent.


The Minister of Foreign Affairs provides weather strict border controls between Ireland and Northern Ireland and has already looked at how to be entered.