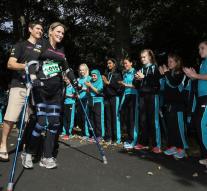 - "Cripple a woman has run a half marathon in Britain in a robotic suit. Claire Lomas from Leicestershire did according to British media five days about the so-called Great North Run from Newcastle to South Shields."

"The 36-year-old Lomas became partially paralyzed in 2007 by a fall from a horse. She broke her neck, back and ribs. Yet they managed to finalize using the \"bionic\" suit in the running event. The British, who also is pregnant again sixteen weeks, is currently very,, very pleased '' with that performance."