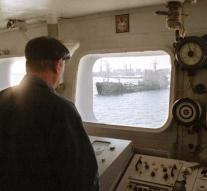 moscow - A Crimean court ruled that one of the Ukrainians who were taken on Sunday by the Russian border guards will be held for two months.

He is accused of illegally entering Russian waters. The others will probably be led later.

Russian border control seized three Ukrainian navy ships that enter the Sea of ​​Azov via the Kerch Strait. The 23 or 24 crew members were taken away.