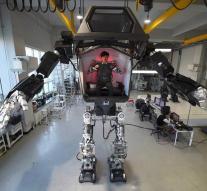 seoul - A four meter manned robot that seems to come straight from the movie Avatar has put this week in South Korea its first steps.

The robot is controlled from the cockpit. Arm movements of the driver are copied by the robot. Each arm of the robot weighs 130 kilos and with a total weight of 1,500 kilos of the ground trembles as he takes a step.

According to manufacturer Hankook Mirae Technology involves the first robot of its kind. 'It is the first manned two-legged robot in the world,' says the boss of the company Yang Jin-Ho at the Telegraph. 'He was made to work in extremely dangerous areas where people can not get normally. '

Yang invested in their own words already $ 200 million in the project to his dream of 'something that only appeared in films and cartoons' to revive.

That the huge robot that seems to come from a Hollywood film is no accident. Designer Vitaly Bulgarov previously worked on films like Transformers, Robocop and Terminator.

Real practical applications for the robot are not there yet, but the production and testing engineers do a lot of experience that they can use in other projects.

In South Korea, the possibility is suggested that the robot could be used to patrol the demilitarized zone between North and South Korea. Before that, however, there is still work to be done. So now the robot is attached to a cord and there are still problems with balance and stability.

'He's only a year old, so we are making small steps,' says Yang. 'In the coming years, he can, like humans, move more freely. '