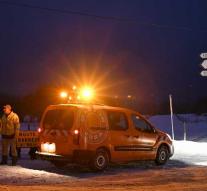 paris - Both crew members of the French jet fighter who crashed Wednesday in the Jura mountains, not far from the Swiss border, have been killed. That has Secretary of Defense Florence Parly...

The fighter plane Mirage 2000-D was engaged in a training flight at low altitude when it disappeared from the radar earlier this week. On board were the pilot and a female navigator.

The search for the victims was hampered by the thick packs of snow and fog after the crsah. The cause of the accident is not yet known.