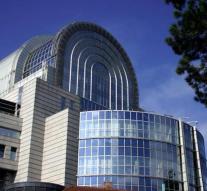 brussels - The main building of the European Parliament in Brussels will be in 2019 at the end of its life and may be demolished. There are 'crumbling', construction defects, leaks and heating problems, in official documents.

The building of the Paul-Henri Spaak building was completed in 1993 and contains 600 offices, restaurants and some large meeting rooms. Large numbers of visitors are received. The facilities are less suitable for a modern parliament during the week and the tax for the environment can no longer be justified, 'that is to say.

Parliament's official leadership prefers new construction, which would cost around 430 million euros, reported the news site Politico. Renovation can be around 30 million. The issue is scheduled for Monday in Strasbourg with the political leaders of parliament, but a decision will only be expected later this year.

The Party for the Animals said in a comment to find new building, 'unacceptable waste of money'.