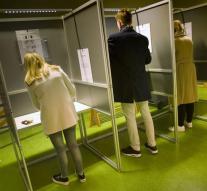 the hague - The next cabinet must quickly develop a new model ballot box, which is electronically countable. That advises the Electoral Council after evaluation of the Dutch parliamentary elections of 15 March.

The current ballot paper is too big. This leads to problems with the pressure and at the ballot box itself: the ballot boxes are too fast and voters are struggling to find the candidate of their choice. That should be different, says the Electoral Council, who also pleads for a ballot paper read with a scanner so that it can be counted electronically.

After the last election, the votes had to be counted manually, because the software used for that purpose was not considered safe. That counting process took a lot of time and led to errors.

The ballot box was very big this time because of the large number of parties (28) that contributed. An additional factor was that the Electoral Council and Minister Plasterk did not want to print the ballot paper twice, so that all the lists fit on one leaf mirror.

The Electoral Council is also silent when voting ballots in full ballot boxes. That happened in a number of places, but it is contrary to the Electoral Act, says the council. She asks the ministers to appoint municipalities here at the next elections. The purchase policy of ballot papers can also be better, in order to cope with an unexpectedly high turnout, such as March 15. In several municipalities there was a (imminent) shortage of banknotes.